Let’s face(time) it… after nearly 10 months of working from home, social distancing, and washing our (very dry) hands, consumers are experiencing more than just Zoom fatigue. You might think consumers are starting to Slack when it comes to managing their health proactively. However, that doesn’t appear to be the case, as consumers remain vigilant in prioritizing their families’ health.

In a continuation of our Natural Products Industry Health Monitor surveying efforts, we checked in with consumers once again during the first week of November to see how they’re feeling about personal health, environmental health, and social health issues.

In April, June and August of this year, we asked consumers how they were prioritizing grocery decisions over the past two weeks. Consistently we’ve seen more consumers prioritizing health over convenience, even in April when consumers’ lives were most disrupted by stay at home orders and uncertainty around the safety of shopping in grocery stores. And in the face of continued uncertainty many months later, we continue to see most consumers are placing greater emphasis on health. 40% of consumers reported they were prioritizing health over convenience in April, and that number rose to 49% in our June survey and now 54% earlier this month.

So consumers are continuing to invest in their health during a global pandemic. Maybe that’s not surprising now, but in April we really weren’t sure how consumers would react to their new circumstances. It was also unclear whether or not consumers would continue to prioritize environmental and social values through the pandemic.

In our same surveys mentioned above, we asked consumers what’s more important and less important to them now compared to in 2019 (the good ole’ days). A similar pattern of increasing importance of personal health, environmental health and social values emerged.

Not sure how to position your brand to meet changing consumer priorities? NEXT can help you test out your positioning and marketing to connect with consumers. Let’s talk!

And for a look at trends that have taken shape this year, along with listings of brands meeting the demands of today’s consumer, the NEXT Trend Guidebook 2020 has it all! 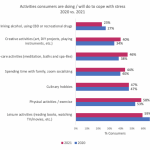 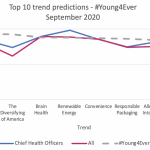