It seems like we’re hearing about a new company selling plant-based drinks, snacks, meals, meats, or dairy nearly every day. There’s the sauerkraut guys at Wildbrinefermenting nuts to make cheese. There’s plant-based mealkit delivery services likePurple Carrot and Thistle, as well as established brands serving up options like “mac & cheeze” and “chick’n enchiladas.” A lot of people are wondering if this is a temporary fad or a new way of life for a large part of the U.S. population.

Maybe COVID has provided a bit of a pressure test. If it were a fad, we might see demand waver in the face of a pandemic, at least that’s the thinking. And maybe that’s why we’ve been asked recently what’s happening to plant-based amidst COVID. There are reasons to postulate that animal-based products are declining during the pandemic. There’s also reason to postulate that they could rise as consumers crave familiar products during unfamiliar times. Not to mention we’ve found ourselves squarely in BBQ season.

Take, for example dairy… Even pre-COVID, milk sales were on the rocks. According to a New York Times article written in January on Borden Dairy’s bankruptcy, “Consumption of fluid milk, which accounts for the vast majority of Borden’s revenue, has been declining for decades, with per capita consumption down about 40 percent since 1975, according to Agricultural Department data. Meanwhile, dairy alternatives like milks from soy, oats, almonds and other sources have been on the rise.” The article also points out that Borden’s biggest rival, Dean, is in straits as dire as Borden.

Retail sales show that amidst the pandemic, animal-based dairy has not made a comeback (though some of the dairy farmers are getting USDA dollars). According to GFI (in partnership with Nielsen) plant-based milk sales have shown far greater sales growth than animal-based milk during March and April of this year compared to the same time period in 2019.

This is good news for the planet AND for the oat milk industry. A story published in The Cornell Daily Sun last December said, “Oat milk does have a lower adverse environmental impact, compared to soy and almond. To produce one pound of oats, it takes one-sixth the amount of water and resources needed to produce one pound of almonds. Furthermore, oats also use 80% less land to grow than dairy milk. In fact, a glass of oat milk is responsible for less greenhouse gas emissions than soy milk or dairy milk.”

To learn more about how consumers are spending on plants, and not animals, during the pandemic, check out the full GFI report. Here at NEXT we’ll be checking in often with the U.S. consumer to predict how their attitudes and behaviors will (or won’t!) shift in the coming months.

In case you missed our “Is there a new normal for grocery shopping?” webinar earlier this week, it’s now available on-demand. We shared actionable, real-time insights on where consumers are shopping for the groceries they need, what this means for the future, and how companies can best support their consumers during the current times. Check it out! 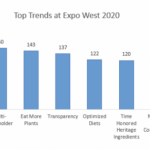 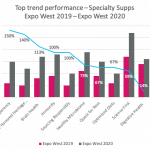