With news of Burger King being the latest fast food chain to pick up the Impossible Burger, we couldn’t help but wonder… when will the Big Fish Sandwich be supplemented with an algae-based fish substitute, or a jackfruit version, or maybe even a lab-grown filet? A slew of seafood alternatives are emerging, such as sustainably grown fungi, sushi made from tomatoes and tuna made out of konjac root.

To see where consumers stand in terms of their willingness to take the plunge into the alt-seafood realm, we turned to NEXT’s Concept Lab. We tested three popular animal-based seafood offerings against their plant-based counterparts. At first glance, among all segments of the US population, the “real” fish was more popular. More people said they would buy it compared to the alternatives… roughly three times more people for each concept. However, when we looked at the two most progressive consumer segments, people who comprise 44% of US households and often shop at the natural channels, that number shrinks from three times as many to about twice as many. Fewer progressive shoppers want the animal-based product, and more want the plant-based one.

Whether these preferences will move beyond the natural channel shopper – much like plant-based milks and meats have – is still unknown. But the early signs of a shift are there.

Contact the NEXT Data & Insights team today to learn more about how we can put the power of NEXT’s Concept Lab database and concept testing to use for your business. 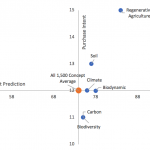 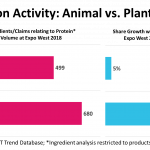